The Human Chain, A Long Anecdote. 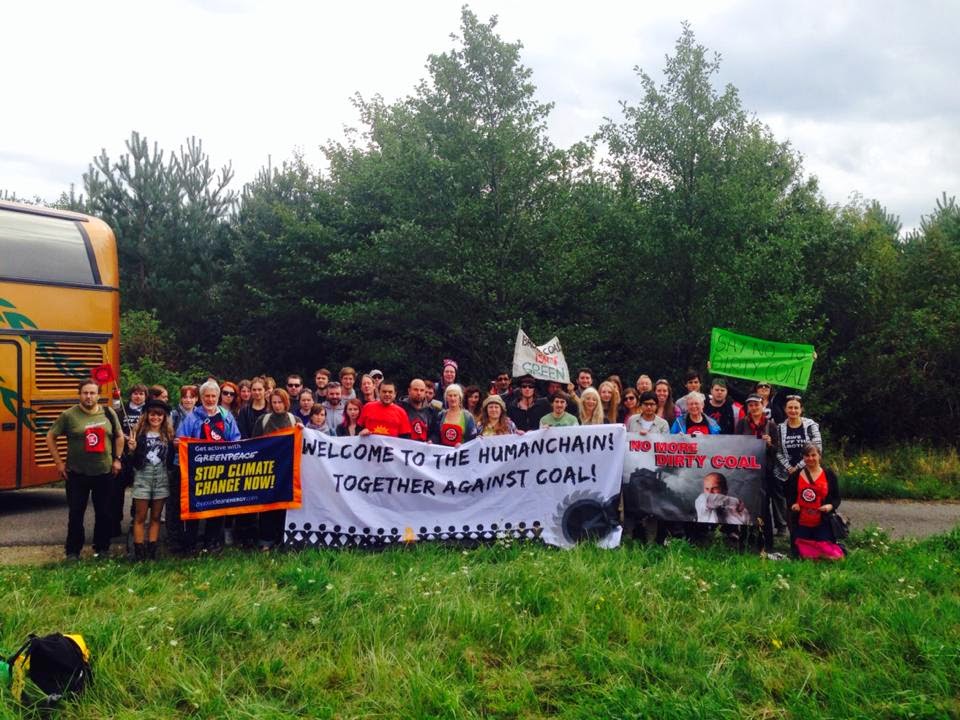 I mossied on down to London on the 21st of August, catching the 12:55 virgin train from Preston (that im pretty sure travelled close to the speed of light) and got on the the tube in the wrong direction, twice, before I finally arrived at Highbury and Islington station where I endured a walk which lead me in more circles than I care to admit. Also, past the highest density of Waitrose shops I have ever seen.  Finally, however, after the use of my nifty compass, Google maps, I finally stumbled upon Canonbury Villas situated on it was the Greenpeace head office. I had to register in order to get the low-down on the weekend ahead and when we were to board our privately driven Hummer SUV’s that were to take us to the Germany.

Now, by hummer SUV’s, I did actually mean coach, specifically ‘Terrys’ coach. To cut a long story short 'Terry' was a bit of a twat who clearly had a grudge against Greenpeace and people who went to the toilet when the coach wasn’t in motion. But for the sake of the article we can assume he needed to money from this trip to fund a heroin addiction OR to pay off his massive debt to a group of local Triads (all just theories). But let’s just say he wouldn’t fair well from a stern review on trip advisor. After an awkward few hours of initial ‘getting to know one another’ e.g. discussing one another’s BMI and our absolute love of the Anglo-Dutch Oil Company, Shell (which terry made us stop at), we all started to get along really well. The initial fear that I would spend the whole trip alone or even worse- with terry- seemed to melt away and I started to relax. We finally completed our 18 hour coach ride to the Lusatia region of Germany in a record time of 21 hours. I am serious when I say I have never seen a more beautiful camp site than that of Camp Deulo. It is absolutely stunning- breathtakingly stunning. A crystal clear lake, deciduous trees with leaves of emerald green and more species of insect than even the most experienced entomologist would be able to deal with! In the evening we had dinner, vegan, of course, and headed on down to the ‘climate camp’ where there was live music and seminars all relating to the issue at hand.

Now in my anecdote we have arrived in Germany. I feel like it is the appropriate time to give you some background information on the cause we were fighting for and help you understand why people have such strong views in regard to it … Currently, we are on course for the biggest rise in global temperatures that the world has seen this side of the last great extinction. The common consensus amongst 99% of scientists around the world is that this is induced by human activities (proven to 95% certainty in the latest IPCC report) and that serious, drastic and sustained international efforts should be made to reduce our greenhouse emissions or the consequences for everyone will be rather dire.

So, “what has this got to do with this article and what about terry?” I bet you’re all thinking.
Well, we shall leave terry for now and concentrate on what Germany and Poland have proposed to do that has caused us environmentalists from across Europe to rise up in arms… Under the Lusatia region of Germany and the bordering area of Poland, there lies a bed of a specific type of coal- Lignite. Now consider this, lignite coal is the most polluting form of coal and coal the most polluting form of fossil fuels. This makes lignite the worst of the worst form of fossil fuel and the worst to burn for energy generation. It has even been branded the ‘Nightmare fuel’ by the New Scientist and condemned by every respectable scientific institution you can think of. It has been proposed that in Germany that the coal company, Vattenfall, want to create 6 new open pit mines and a government owned company in Poland wants to open just one new open pit mine…the size of Manhattan. Both of these mines will commit Germany and Poland to fossil fuels until at least 2050 and if we’re serious about tackling climate change we need to reduce our emissions by at least 80% in that time frame. Germany could quite comfortably achieve this (considering Germany already generates a large proportion of its energy from solar and wind energy) and something the Poland needs to seriously start doing...something that can't be done if these mines go ahead. 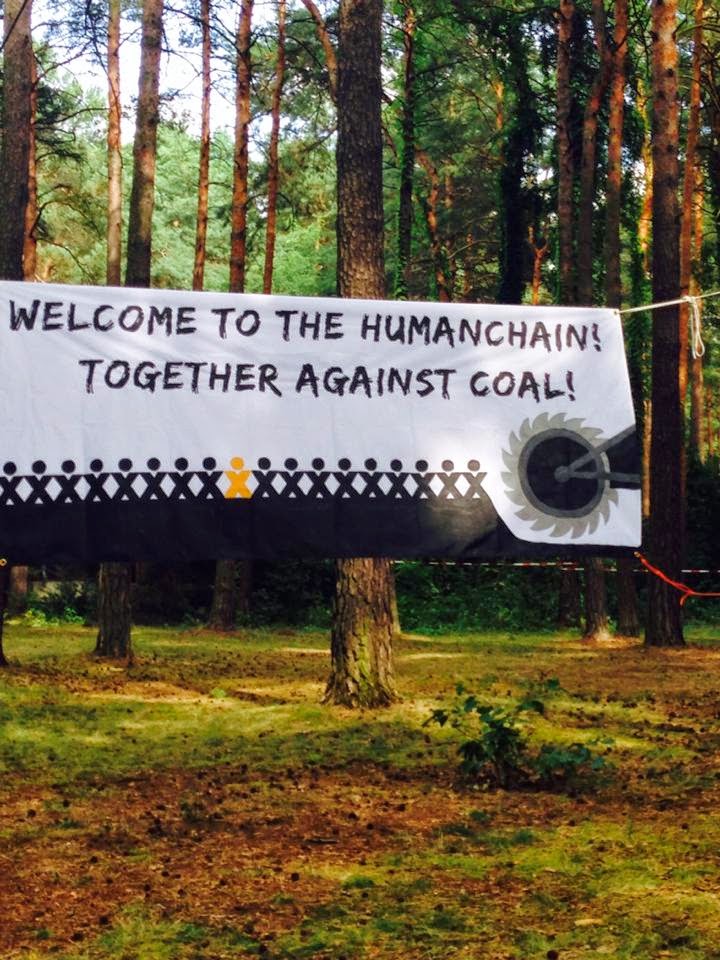 It is worthy of note that these proposed mines will displace roughly 9,000 people from their homes, irreversibly damage the landscape and most of all its emissions will condemn future generations to a life plighted by storms, floods, droughts and a whole host of other things.

On the Saturday, we were given a few pep-talks by people from various Greenpeace groups from across Europe (as we were joined by many different nationalities fighting for a common cause). But the day really began when the camp sight owner arrived to give us a speech. He was a man of average height, black hair that was balding from the front, with a distinctly businessman attire. He spoke with a strong German accent, and mustered the best English he could (admitting it had been 20 years since he had tried). He gave a speech thanking us all from the bottom of his heart for our help and telling us how much it meant that we were there to stop the coal companies that want his home (the camp site- lake and all) to develop their coal mines. He spoke the whole way through with a lump in his throat and his eyes reddened by the will to cry. It was brief but moving and made us all the more determined to make the event a huge success.

I witnessed what I can only describe as a crime against nature on that day… a sight that made me sick to my stomach and put all of our effort into prospective. It was of an open cast coal mine in Lusatia. An awful, awful travesty that had left the whole place void of life. It was as if the Vattenfell had robbed the earth of its beauty, and any beauty it will ever have once the coal is all gone. It was as if life had never existed, just a desolate land of black waste as dark as the night sky with intermittent whiteness where chemicals had been used to minimise the amount of poisonous dust that blew into the surrounding areas. It was then I noticed a machine- at first glance it looked like a transformer- this feat of engineering used to pummel the land and that’s exactly what it reminded me of…watching a man repeatedly gouge and punch the body of a man long dead. It was then during a Greenpeace ‘photo session’ that my eyes were drawn to the perimeter of the open cast mine to the forest line on the edge. I imagined how this area would have been and the wonders it would have contained before there coal companies moved in- owls, deer, flowers and wonderful trees tall as houses. But it was all gone- for nothing but to feed our energy hungry society. It was then I had to look away because admittedly, I had tears in my eyes. I wanted to weep for the injustice that befalls nature in the name of progress.

We stayed for a while and security turned up but no trouble occurred. Well, I did but my foot over the barrier because you all know me… I live the YOLO life style. They barked at me in German, but brushed it off with a smile and a flash of my ‘STOPP KHOLE’ banner to cover my ignorance of the German language. After a few more photos and what not we made tracks, moving on to the human chain. It was then that Terry really pissed everyone off stating to someone that we were being ‘nuisances’ and we were ‘just after people’s jobs’!! Well, I was a 5ft4” ball of rage at that point but the promise of cake at the human chain was enough to pacify me. After all- he was a twat- but the twat that was driving me back to England so I best let his high cholesterol diet do my bidding. 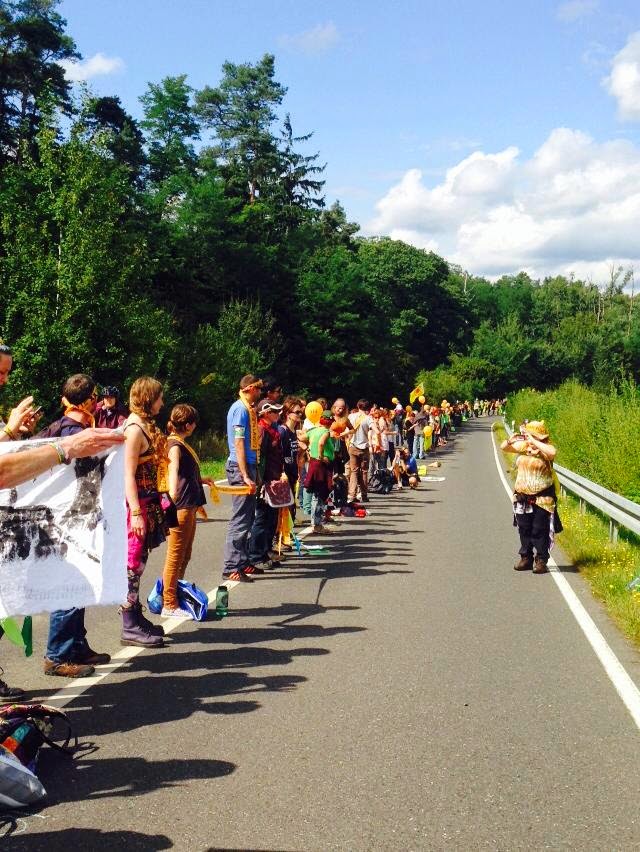 We arrived at the human chain only to be met by the biggest gathering of activists I had ever seen- 7,500 of us! All there to try and stop these proposed new coal mines. There were all sorts of people from all over the world. We had banners, badges and placards, all everyone was in good spirits, hopefully that we could change the world in a peaceful way. I was really shocked to see the vast range of ages- there were people there pushing into their 90s! I ate the cake I was promise and we moved into our positions, making a human chain from Germany to Poland where they propose to dig for coal. We all had our signs and intermittently I chanted ‘FOSSIL FREE DEUTSCHLAND’, but failed to gain momentum and so I made the decision to phase it out as to not look to much a fool. Occasionally, Mexican waves raced along the lines in both directions closely followed by a film crew. We were there for about an hour in all and afterwards we went to a small music festival on the polish side of the boarder. We chose not to stay there for long, however, the grey concrete and heavy police/army presence seemed to echo life in the Soviet Union. Not to mention the amount of people that spoke to me in Polish which I found quite disorientating. So after dropping some shapes and attempting to be down with the kids to some environmental dubstep, we headed back to Germany and our camp site.

The following morning we packed away our things, and headed off back to England where terry truly took the piss and got lost in London looking for our hostel. As if things weren’t bad enough I had come down with a rough case of tonsillitis which in the heat of the moment I mistook for Ebola. But all in all, the things I had done, the people I had met and the cause we represented made it a trip well worth the while, and well worth the long travelling! If needs be we’ll be back gain (and gain and gain!). Fossil fuels are not the fuel of the future.